Matteo Salvini in Italy, Viktor Orban in Hungary, Jaroslaw Kaczynski in Poland, Sebastian Kurz in Austria, Andrej Babiš in Czech Republic. All can be qualified as ‘right-wing populists’. Behind the word, a common vision: to embody the will of the people - the so-called ‘silent majority’- while rejecting minority groups, especially migrants. Focus on the consequences of rising populism on European migration policy and the initiatives to counter it.
News

Europe divided about the adoption of the Global Compact for Migration 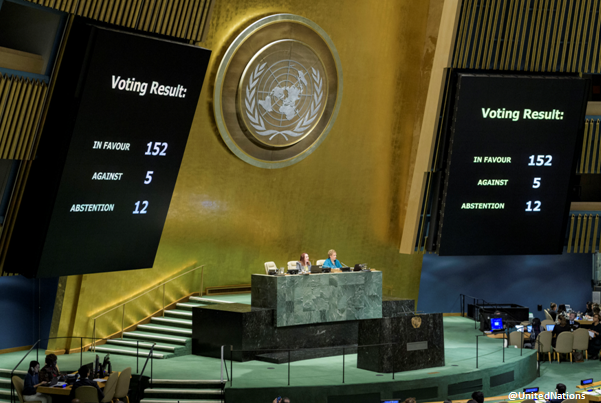 On 19 December 2018, the Global Compact for Safe, Orderly and Regular Migration (hereinafter the Global Compact for Migration) was adopted by the United Nations General Assembly with 152 votes for, 12 abstentions and five votes against, which included Hungary, the Czech Republic and Poland. Despite being non-binding, it opened up rifts between the countries of the European Union.

Launched following the New York Declaration in September 2016, the Global Compact for Migration was the subject of months of consultation with the aim of developing a tool for international cooperation on migration. The final draft of the Global Compact highlighted “our collective commitment to improving cooperation on international migration.” The New York Declaration also led to the development of a Global Compact on Refugees, which was also adopted in December. Focused only on people in need of protection, it gained far less media attention and was not subject to the same controversy.

In terms of content, the Global Compact for Migration recalls principles such as the defence of human rights, recognition of national sovereignty and proposals to help countries to deal with migration. The provisions of the Global Compact are based on the European Convention on Human Rights and its case law and could, in turn, inspire the implementation of European legislation on legal economic migration. For François Gemenne, a researcher specialising in migration at Sciences Po and Université libre de Bruxelles, “the Global Compact for Migration is not a very ambitious text. It is based on a fairly broad consensus and tends to state the obvious. But it is worth having. It is positive in the sense that it is the first text that lays the foundations for international cooperation on migration.”

Despite its non-binding legal nature, six members of the European Union have refused to sign the Compact: Hungary, Austria, Poland, the Czech Republic, Slovakia and Lithuania, and two have agreed to signed it after national debates: Estonia and Croatia. Although not all these countries have been equally affected by the increase in arrivals in 2015-2016 and their governments are not all of the side of the political spectrum, they have one thing in common: they have all made immigration a priority and positioned themselves as hostile to immigration. Their rhetoric reflects and nurtures the xenophobic views of a segment of their populations, giving them the label of “populist governments”. They promote a protectionist vision of the nation state, in which foreigners are presented as the enemy of “the people” being defended.

This ideological unwillingness to adopt the Global Compact for Migration is, according to some specialists, rooted in the belief that they will lose national sovereignty in favour of global governance. According to the United Nations Secretary General, Antonio Guterres, this theory does not hold up to scrutiny because human rights and sovereignty cannot be disentwined; human rights strengthen sovereignty. For others, historic reasons linked to the breakup of the Austro-Hungarian Empire could explain their unwillingness. These countries gained independence relatively recently and may feel the need to assert control of their borders. Nevertheless, according to Catherine Wihtol de Wenden, “global governance of migration would enable a departure from the hypocrisy of closed borders that generates millions of ‘undocumented’ individuals and serious human rights violations, superficial security policies and submission to xenophobic ideas.”

The abundance of “fake news” about the Compact, feeding into the idea that it would open the door to unchecked mass immigration into Europe and that it would create a right to immigration, has also influenced these European countries’ positions. European right and extreme right-wing parties have seized on the issue, denouncing it as an “imminent danger” in the words of Vlaams Belang, the Belgian extreme-right party, or as an “act of treason” according to Marine Le Pen. Louise Arbour, United Nations Special Representative for Migration, asserts that “it is surprising that there has been so much disinformation about what the Compact is and what the text says. […] It creates no right to migrate. It places no imposition on States.”

The adoption of this Global Compact has also had repercussions at the national level. The rifts have led to the implosion of the Belgian government. The members of the coalition from the Flemish nationalist party N-VA demanded that Prime Minister Charles Michel refuse to sign the Compact, which it opposes. As a consequence of this deep division, the N-VA ministers resigned on 9 December, leaving the Prime Minister at the head of a government without a parliamentary majority.

In Germany, the Compact also played an important role in the election of a successor to Angela Merkel at the head of the CDU, on 7 and 8 December. While she argued in favour of the Compact, asserting that “the issue of migration can only be addressed through international cooperation, and it would be wrong to believe that one country alone can overcome this challenge”, the text divided her potential successors. In the end, Annegret Kramp-Karrenbauer, who is herself in favour of the Compact and aligned with Merkel’s politics, was elected.

The Global Compact calls for international cooperation, but its content has been co-opted by the populist parties of the right and extreme right to demonstrate their tough stance on migration.  Unfortunately, the controversy has only further exacerbated the discord between the Member States of the European Union on this subject.