Legal pathways for refugees to Europe: developments and challenges

In 2014, the Juncker Commission made the implementation of legal migration channels for people in need of protection a priority. Five years later, the replacement of irregular and dangerous migration channels by legal and secure pathways to Europe is becoming increasingly pressing. Currently insufficiently exploited, their development is one of the main challenges with regards to migration policy for the new European Commission and Parliament.
News

Valérie Régnier, representative in France of the Community of Sant’Egidio 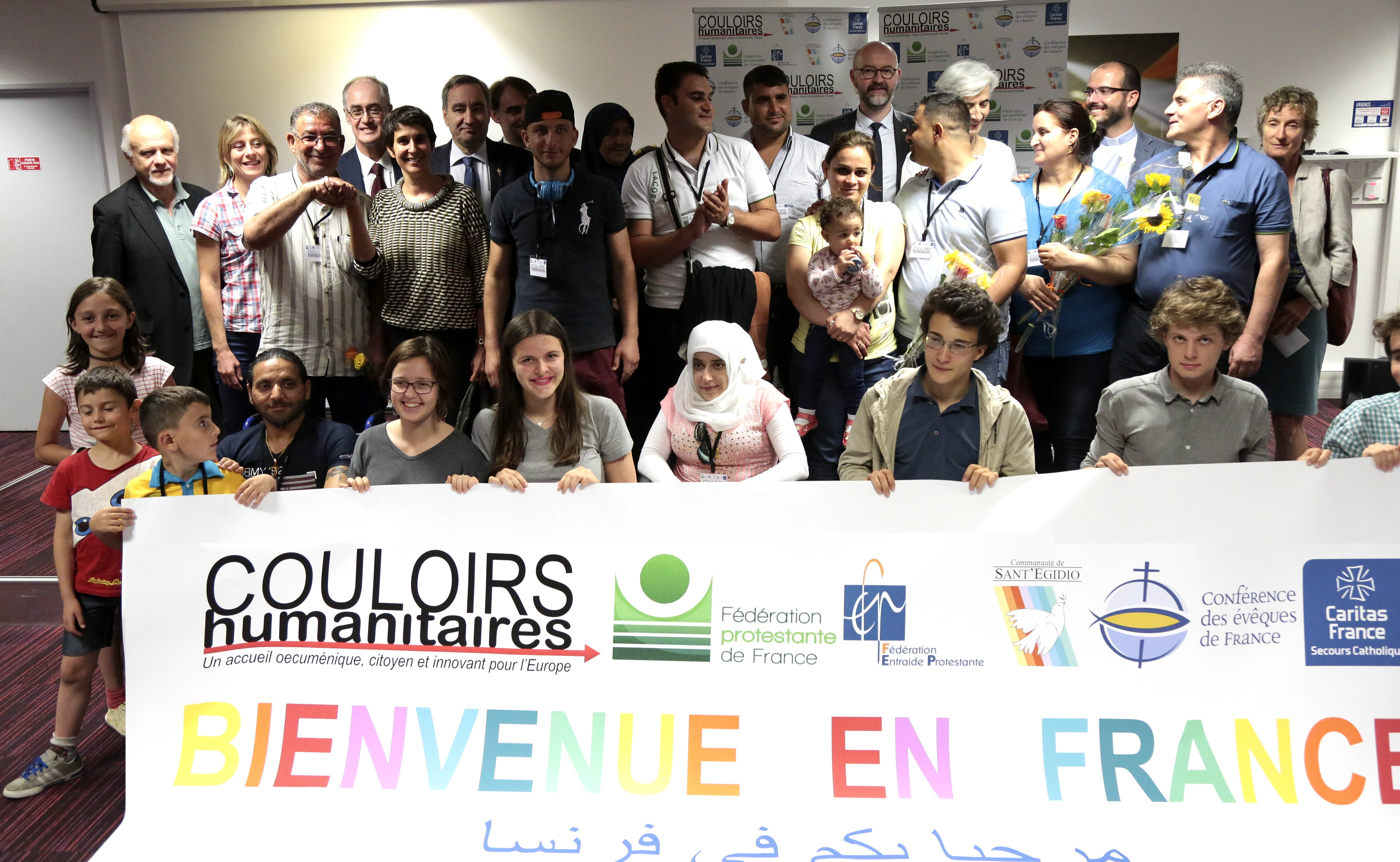 Valérie Régnier is the President of the Community of Sant’Egidio in France. Currently active in 74 countries around the world, this Christian community is dedicated to helping the poor.  It was founded in 1968 in Rome and has been present in France since 1997, where it now has 2,000 members, supporters and volunteers.

Humanitarian corridors first appeared in Italy in 2015 as a response to the growing number of migrant deaths in the Mediterranean. Can you tell us about these humanitarian corridors, and what sets them apart from other legal pathways for migration? For example, how does this differ from resettlement?

The Humanitarian Corridors programme came about as a reaction to the pointless deaths at sea – migrants were drowning in numbers, while there were actually conditions in place for refugees to legally enter Europe. In fact, when an alternative to these ‘deadly crossings’ started being discussed in Italy from 2013, there was no need to develop new legal procedures than those already existing in the Schengen zone. Humanitarian Corridors offer migrants a safe, legal route into Europe, based on the existing legal framework, targeting the most vulnerable.

Unlike the various resettlement programmes, Humanitarian Corridors guarantee a global, non-technical and humane approach to the issue.

From a legal point of view, the families arrive in the country with a category D asylum visa. They must then formally request asylum upon their arrival in France. As part of the Humanitarian Corridor Protocol, the State facilitates access for asylum-seekers to a GUDA (a dedicated reception desk for asylum seekers) at their local Prefecture, and fast-tracks them through the OFPRA (the French office for the protection of refugees and stateless people), making it easier for them to integrate and making it easier for the for the hosting group.

Italy, France, Belgium and Andorra have already implemented this kind of programmes. Are there any other partnerships planned with other European governments to create new Humanitarian Corridors?

First, let’s go over the various protocols signed with these European governments. Italy has already signed two consecutive protocols (the first in December 2015), to ensure the safe arrival of 2,000 refugees from Lebanon. At the same time, a protocol concerning refugees arriving in Italy from Ethiopia was signed (for 500 people) and has recently been renewed.

Currently, no other country has yet signed a protocol, but the Community of Sant’Egidio is heading up discussions to open a corridor to Germany and Spain, and is promoting these Humanitarian Corridors as a model based on the European legal framework – and replicable in all European countries.

In terms of the countries of origin, we’re actively working to open Humanitarian Corridors from Libya, where the situation is currently extremely urgent.

How does it work when people have been identified as vulnerable within the camps, and once they’ve received a humanitarian visa?

Each arrival in France lands in Charles de Gaulle airport and is given a warm greeting with flowers, balloons and a welcome speech. This is a crucial moment in the integration process, when they get their first sight of the country which is welcoming them with open arms. In Italy and Belgium, the arrival of each family is even the subject of a press conference. These founding moments will remain deeply engraved in the memories of the people welcomed.

The families are introduced to the volunteers, who greet them before going to their accommodation, their new living space. Currently, 34 départements are involved in the project in France. Most families are directed outside of the Paris region, to rural and urban locations, in more than 60 towns and cities in France. They are only exceptionally hosted in Paris or its region.

Each team of volunteers is different and is organised according to their skills, capacity and the needs of the family. Often, within a group, the volunteers divide up their various tasks and responsibilities towards the family: healthcare, asylum procedure, learning French, sociability, etc. A friendly social network gradually forms around the families and helps them integrate, allowing them to flourish in their new home.

What is the actual role of the various churches and ecumenical organisations who are participating in the host programme?

The churches and organisations play multiple roles, and also help bring on-board various non-confessional partners. The Humanitarian Corridors, first created by the Catholic Community of Sant’Egidio and the Italian Evangelical Churches, were initially an ecumenical project. In France, there are five partners behind the project: the French Protestant Federation (with whom Sant’Egidio founded the Humanitarian Corridors in France), the Protestant Federation for Mutual Aid, the Conference of French Bishops and the Secours Catholique – Caritas France. We work together, in both the transit and host countries. Each church mobilises their own network and local communities, parishes and organisations (faith-based or otherwise) are involved in the project at all levels.

Since 2015, when Pope Francis called on each parish to host a family of refugees, a number of groups were created in France. After a positive first experience, some of these are even ready to take on another family. Others, however, are “dormant”: they didn’t host any families at the time, but could be reactivated by hosting a family from the Humanitarian Corridors. Many of these dormant groups still need to be reactivated.

Generally, in France, most of the host groups are parochial and use this as a basis for their hosting activities. Some even work on a diocese level, and the same is true for the network of protestant churches. Moreover, in various places the bishops and pastors act as relays, or can even be at the initiative of a hosting programme or central to bringing people together. It is so interesting and rewarding to see host churches work hard every day to provide unconditional help to refugees, the majority of whom are Muslim.

The programme has been active in Italy since 2016 and in France since 2017. What have been the results so far? What have been your biggest successes, and what still needs to be done?

By the 30th of April 2019, almost 2,500 people were able to make their way safely, legally and in security to Europe via the various Humanitarian Corridors in place.

More than 2,000 refugees have been hosted in Italy, 150 arrived in Belgium and one family was taken in by the Principality of Andorra.

As for France, by the 15th of June 2019, 341 people had arrived in the country from Lebanon. The focus is the same as in Italy, with 90 % of those arriving as a family with an average of 4 people. More than 40 % of the refugees have been children. The vast majority of these families were originally from Syria, but Iraqi and Palestinian families have also been taken in.

Thanks to the first French Protocol signed on the 14th of March 2017, the first families could arrive in July of the same year; however, most of the families have arrived in France within the past eighteen months (since January 2018). It’s still too early to take any major lessons from our experience, but there have been some clearly positive results. For example, there have been no instances of “flight” (leaving for another European country) among the 341 refugees who have been hosted in France.

For the asylum request, a crucial part of the integration process, 98 % of the families who have so far filed their application received a positive response from the OFPRA within an average of 5 months. This, unfortunately, is longer than the period initially agreed in the protocol. Indeed, in our experience the administrative proceedings have been extremely uneven – they have been very quick for some families and much longer for others. Even if, in the end, protection is granted, one of our remaining challenges is to continue reducing the length of the procedure for all of our families, in order to facilitate a speedy integration.

Concerning schooling and training, every child was enrolled in school very soon after their arrival and every adult has been given French classes, either by volunteers or by professionals paid by the groups. A large number of the adults taken in as part of the programme have in turn become volunteers with local organisations (food banks, clothing banks, etc.), creating links with the community and giving them an immediate sense of purpose while they are still unable to work.

Learning French, however, remains a major challenge for the adults, and especially the eldest, who pick up the language much more slowly than children. Various efforts have been made to focus on some adults from particularly vulnerable families, in particular those who never went to school in their home country.

The volunteer groups in place are all committed to helping and supporting their respective families for at least a year. While not long enough for them to become properly integrated, it is generally sufficient for them to become somewhat independent. So at the end of this first year, the overwhelming majority of families have access to their own long-term accommodation, often through social housing our privately rented apartments (for families eligible for housing benefits). However, the number of adults who have successfully returned to work remains quite low, in spite of some fairly spectacular success stories.

A good indicator of the Humanitarian Corridor’s long-term success is the fact that every one of the host groups has said that they are willing to repeat the experience. In fact, some are already on their second host family. Some beautiful stories of friendship and integration are being written.

We’re now looking to build on this success, expanding and organising a France- and Europe-wide host and integration network. This will not only provide the capacity to take in the remaining refugees for the current protocol (150 in France), but go even further too: we want to create, reinforce and expand a safe, legal route for refugees to access Europe without having to brave death. The goal is to help as many vulnerable people forced into exile by conflict, violence and political, economic or environmental upheaval as possible.