What evolution of asylum policies in European countries since 2015?

In the 2010s, and in particular from 2015 onwards with the intensification of the Syrian conflict, the number of asylum applications significantly increased in the EU Member States. This situation has led to political tensions in and between some countries – particularly those on the "front line" such as Greece and Italy – regarding the suitable responses in terms of reception and integration of exiled persons. How have national asylum systems in Europe adapted? Is the reaction of the European institutions – in a fragmented Union on the issue of asylum – appropriate?
News 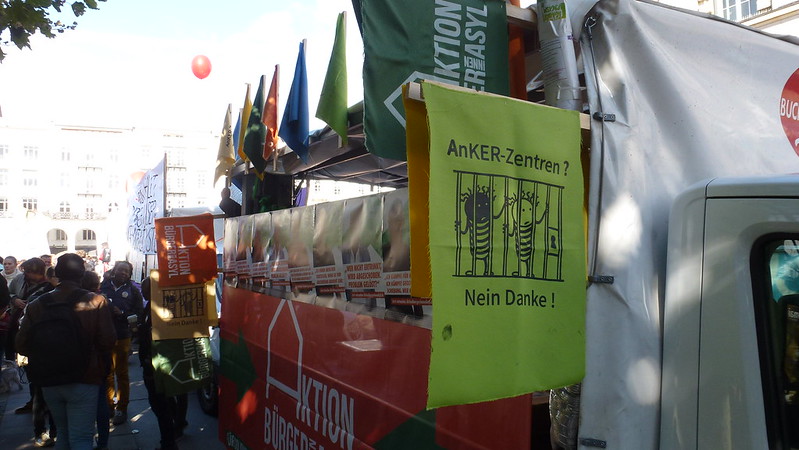 From 2015 onwards, Germany was held up as a model for reception of asylum seekers in Europe, with the country standing outdue to its openness to Syrian nationals fleeing the civil war. This policy led to an explosion in the number of asylum applications made there, rising from 202,645 in 2014 to 476,510 in 2015. That year, Germany received the largest number of asylum seekers in Europe, a long way ahead of second-placed Hungary, which received 177,135. On average, just over 47,000 applications were submitted in each European Union (EU) Member State in 2015.

In order to deal with unprecedented reception needs, especially in the south of the country, 2016 and 2017 saw the opening of “arrival centres”, a new system bringing together a number of administrations involved in the registration of asylum applications and, in Bavaria only, “special reception centres” for people placed under the so-called “accelerated procedure” Deeming that these measures did not go far enough, Horst Seehofer – at the time the Minister-President of this Land in the south of the country – decided to open “transit centres” only for nationals of countries for which protection is rarely granted. After he became Federal Minister of Interior in March 2018, he proposed setting up facilities called Ankerzentren, bringing together a number of government bodies, with the aim of speeding up asylum procedures, returns of failed asylum seekers and transfers of people placed under the Dublin procedure.

Whereas other EU Member States were also reaching saturation point, in terms of both their reception and accommodation systems and their administrations – especially those responsible for examining applications for protection – could they take inspiration from this model? How have the Ankerzentren done, almost two years after they were set up?

The term “Anker” is a composite of a number of German words – “An(kunft)”, meaning “arrival”, “k(ommunale Verteilung)”, meaning “communal distribution”, “E(ntscheidung)”, meaning “decision”, and “R(ückführung)”, meaning “return”. The management of these reception centres falls to the Länder, which are responsible for both reception and return of asylum seekers. These facilities can accommodate up to 1,500 people and gather together all of the government bodies – including federal bodies – involved in examining asylum applications and meeting applicants’ needs, i.e. the Federal Office for Migration and Refugees (BAMF), the Federal Agency for Employment, the Ministry of Justice, etc.

On 1st August 2018, six “pilot” Ankerzentren opened in Bavaria; the plan was that they would be followed by similar facilities in all of the German Länder, as set out in the national coalition agreement of February 2018. Apart from Saarland and Saxony, which are run by Minister-Presidents from the conservative CDU party, the other regional governments refused to set any up in their territories, mentioning a fear of concentrating asylum seekers and the violence to which this might lead or the difficulty of gathering together departments which come under different government bodies. So Germany currently has eight Ankerzentrendotted around three Länder, most of them in Bavaria.

In Germany, for the first six months asylum seekers are referred to “initial reception centres” according to a “distribution key” which takes various criteria, such as each Land’s number of inhabitants, into account. They are then provided with accommodation either in collective ones or in private housing, usually managed by the municipalities and often in the same Land. In areas where there are Ankerzentren, asylum seekers are accommodated in them throughout the examination of their applications, which must take no longer than eighteen months, and six months for families with underage children. At the end of the procedure, people who are granted international protection, both in Ankerzentren and in “traditional” reception centres, are distributed to accommodation managed by the Land’s municipalities. Failed asylum seekers must either be sent back to their countries of origin or transferred to the Member State responsible for their applications if they are under the Dublin procedure, and theoretically this should happen more quickly if they are accommodated in an Ankerzentrum. Even so, they may be placed in a detention centre pending deportation.

From the very start, and following the example set by many politicians, some members of civil society[1], such as the Bavarian Council for Refugees, have denounced the breaching of asylum seekers’ fundamental rights as a result of placement in an Ankerzentrum. According to the Diakonie and Caritas organisations, collective accommodation encourages promiscuity, and this lack of privacy is inappropriate for long stays by vulnerable groups of people who have already been traumatised and may develop further psychological problems.

As they isolate residents from the local populations, Ankerzentren are decried because they fail to offer their residents any prospect of integration. These former military barracks, surrounded by barbed wire fences, are often located on the edges of towns, a long way from residential areas, and have been compared to prisons due both to their architecture and to the rules governing them – asylum seekers’ movements there are limited. Children who should, in theory, attend school in the centres, do not get a curriculum suited to their ages and educational levels. However, each centre is different – the Länder have a certain amount of independence in how they manage them, and some of them are managing to limit these pitfalls. That then raises another problem – the inequality of the rights of asylum seekers across the country.

On 1st August 2019, after the opening of seven Ankerzentren and 8,200 applications processed in a year, the German federal government said that it had met its target of speeding up the asylum procedure, with applications being assessed in an average of less than two months, compared to three months elsewhere in the country. According to civil society, this speed does not necessarily mean greater efficiency as the error rate in the BAMF’s decisions had increased. Furthermore, this speed could limit asylum seekers’ access to information and rights. Indeed, their interviews take place two to three days after they arrive at the centre, which does not really allow them to prepare it. The fact that the information sessions are organised by the Federal Office, “raises concerns about their quality”, as this is the same government body which examines the asylum applications. Finally, as access for NGOs to Ankerzentren varies from one region to another, it can be difficult to get independent legal advice.

It is also difficult to say for certain that the second goal stated, the speeding up returns and transfers of failed asylum seekers, has been achieved. According to NGOs, some of them end up fleeing the centres so as not to be expelled, which means they can end up living out on the streets. In addition to this, other obstacles, such as the decisions made by the authorities in the applicants’ countries of origin, play a part in limiting expulsions by refusing to take them back or failing to provide the documents needed for this to happen. People involved find themselves trapped in Ankerzentren with no release dates.

So far the German Ankerzentren “model” is an exception in the European reception landscape. Although accommodation strategies vary from one EU State to another, with some distributing asylum seekers according to the nature of their procedures and others making no distinction, some choosing collective accommodation and others individual housing, no other country has suggested grouping the accommodation together with all of the government bodies playing a role in the asylum procedure. In order to cope with the challenges of chronic overcrowding in reception facilities leading to a growing number of asylum seekers living in the streets, and even longer procedure times, the way that these centres are organised could serve as inspiration for Member States. However, a “model” accused of breaches of asylum seekers’ fundamental rights and in particular decried for heightening trauma and the delay in integration it brings about, does not look to be something that can decently be exported – it can even be condemned in Germany itself.

[1] See also the joint press release issued by the PRO ASYL NGO and the Alliance 90/The Greens party (in German).

ReturnLearn more
Actualités | Is a reform of European asylum policy still possible?
Actualités | "The EU-Turkey Statement made it impossible to provide decent and humane reception conditions to asylum seekers"
Actualités | Germany’s Ankerzentren: a quick way of managing the asylum procedure while undermining fundamental rights
Actualités | The coronavirus effect on European migration policy
Actualités | "If the question of the distribution of migrants throughout the EU is codified, we will no longer see the kind of thing that is currently happening in Greece"