Cecilia Sanfelici – Chargée de plaidoyer au sein du collectif Europe Must ActEnglish Version
1.In what context the report “All I want is to be free and leave” has been produced?

“All I want is to be free and leave” is the first report resulting from a collaborative project between Europe Must Act (EMA) and the Samos Advocacy Collective (SAC). The research and monitoring project is primarily aimed at investigating the human impact of a closed and controlled reception facility on the lives of people who are forced to live there and, by amplifying the direct accounts of residents, to challenge the use of such structures both in Greece and elsewhere in Europe.

When the project started to be created last summer, many factors led us to consider it necessary to set up a mechanism to monitor. Firstly, both asylum seekers and NGOs had very little to no information regarding what the facility would look like and work, what services people could have access to, if transportation between the remote location and the town would be provided etc. Secondly, the incoherence of European and Greek authorities – the former stating that the new MPRICs would not be closed facilities and the latter stating instead that they would, civil society was worried about what restrictions could be imposed on the freedom of movement and fundamental rights of the residents of the new camp.

Between October and December 2021, EMA and its Research Team, made up of experienced researchers and academics, supported EMA members on the ground and activists and volunteers from the SAC to carry out interviews with camp residents. The research project is ongoing, and we are hoping to release something new in the coming months

2. How would you describe the living conditions of asylum seekers in the camp? Is there an improvement when compared to the old, overcrowded hotspot of Vathy?

The only way I want to answer the first question is through the words of residents of the new camp that we have collected during the last months. “I feel like I'm in prison. I feel lonely, lazy, and like I'm in another world. The new camp is definitely better than the tent, there is a bathroom, kitchen, water, electricity, refrigerator and air conditioners. But I stayed in the tent for three years, then now what, I moved to another camp? I ask myself these questions: how long will I be called a refugee? When will I become a human? A human who works, goes out, travels, does what any other person would do?”.

Several residents have highlighted key problems in material and sanitary conditions, with containers that host more than 4 people but only have one key, thus putting vulnerable residents at risk; containers getting flooded due to structural defects; inedible food because it is expired or of extremely low quality; difficulty in accessing medical services and being referred to specialized doctors or the hospital. As one resident stated, “if someone is really sick, he’s going to die. Nothing will prevent him from dying...”.

However, living conditions in the camp go beyond this. People’s lives are severely impacted by structural features – barbed wire, military double-fences, digital surveillance directly connected to Athens, high presence of police and private security guards, remote location and curfew – all features which make the camp resemble a prison. “My feeling is that I’m in prison. This is what I feel. [There is] too much control around, cameras, and drones sometimes.”

This is in stark contrast with statements by European and Greek authorities – both of whom want this kind of camp. Their narrative has been centred on the alleged improved conditions compared to the old camp. Worryingly, a part of the media coverage around the inauguration of the camp reported contributed to the perpetration of this narrative.

We believe that whether the camp is an improvement or not should be decided based on residents’ testimonies. “Now we can’t leave, we’re trapped. It’s never been good from a mental health perspective, but after two years being here and now going into the third year [in Samos] it’s tiring.” Similar recounts suggest no, and we echo these voices in stating that freedom and dignity should never be compromised.

3. During her first visit to Samos in March 2021, the EU Commissioner Ylva Johansson promised that the new facilities “will not be closed”. How is it in practice?

Despite Johansson’s statement, Greek Minister of Migration Mitarakis instead stated[1] that the camp would be closed. On the morning of the inauguration, a sign reading “Closed Controlled Access Centre of Samos” appeared over the gates of the camp.

Since the opening, all camp residents are subjected to a curfew that prevents them from leaving the camp between 8pm and 8am. People recounted that they were obliged to sleep outside, in the cold as they did not go back to the camp on time at night. Every movement out and in the camp is extremely lengthy as every person and child is searched thoroughly. Kitchen equipment such as knives and alcoholic beverages are only two of the items not allowed in the camp. People with valid asylum applicant ID cards do not need special permission for leaving. However, the remote location of the camp and the fact that people have to pay a €3,20 return ticket for the bus to reach the town indirectly forces many people to be stuck in the camp due to lack of money.

Since November 16th, 2021, new restrictions are being implemented, without an official ministerial order or communication. People who don’t have a valid ID card are not allowed exit and entry in the camp. These restrictions impact two categories of people: (i) newly registered people who do not yet have a card. Greek law already provides the possibility for people to be prevented exit from any Reception and Identification Centre for the first 25 days following the registration of their asylum claim. However, waiting times for the ID card can go up to 6 weeks in Samos, thus condemning new arrivals to have very limited access to the essential services provided by NGOs. (ii) people who have received a rejection to their asylum claim and have not (or cannot) filed an appeal. At least 100 people are affected by these restrictions that, if do not have a clear legal justification, amount to unlawful detention. This has already been ruled by the Administrative Court of Syros in this case.

Europe Must Act and the Samos Advocacy Collective have already interrogated the EU Commission and Greek ministry regarding the legal basis of such restrictions[2].

Regarding this second categories of residents, the situation is extremely complex and delicate. As a matter of fact, they can leave the camp but would not have the right to enter the camp anymore. This would entail having no access to basic services such as shelter, legal services, medical services, in addition to cash assistance and food provision. Moreover, these restrictions are impacting an increasing number of people due to the admissibility interview. As a matter of fact, the EU-Turkey deal and the Joint Ministerial Decision of June 2021 declaring Turkey as a safe third country have condemned asylum seekers from five nationalities – Syria, Somalia, Pakistan, Bangladesh, Afghanistan – who are believed to be safe in Turkey to have their asylum claim evaluated in the admissibility in the first place, and in the merits only if the first evaluation is successful. However, as almost all asylum seekers from these nationalities in Samos are rejected based on the concept of turkey as a safe third country, and as Turkey has not been accepting nay return since March 2020, hundreds of people find themselves stuck in a legal limbo.

Despite having separate areas of the camp, the camp does not have the amenities and features necessary for vulnerable people such as single women and unaccompanied minors. For instance, the “safe zone” for UAMs and children does include a playground, but this is closed and completely surrounded by high fences and barbed wire. This goes against recommendations by the EU Fundamental Rights Agency, that stated that “children should not be exposed to prison-like fencing, and should not witness violence. Unaccompanied children should be placed in adequate housing with necessary support services […] outside the multi-purpose centre[3].” Needless to say, this is not the case. According to the latest UNHCR data (23/01/22), 21% of camp residents are children.

A special place, run by competent professionals, for women is lacking. Moreover, residents report that up to 4 single people are accommodated in each container, which have two rooms. However, the rooms have no keys, and there is only one key to the container. This puts vulnerable people, such as LGBTQI+ members, at great risk.

5. Do children in the camp have access to education?

According to Greek law, all asylum-seeking children have the right to access education. However, the reality often differs from practice. The majority (if not all – I lack exact data on this) of children living in the closed camp now have access to formal education through normal classes – together with Greek pupils, or special classes, that are run in the afternoon, thus preventing integration within the local community.

[2] A press release on this issue will be published soon 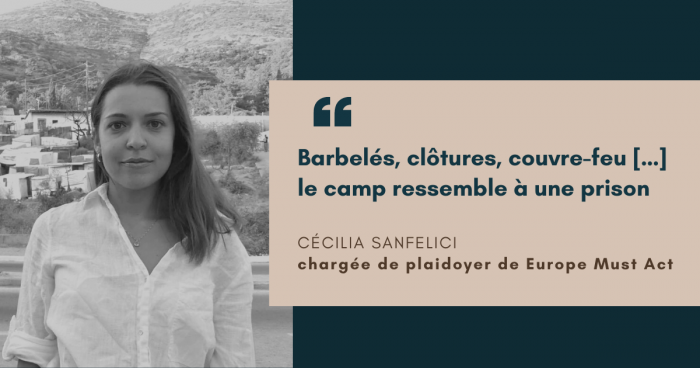